Turbo Turf’s introduction of the HYBRID series of hydroseeders marks a breakthrough in  hydro seeding equipment design.   Now there is a unit that combines the best features of both jet and mechanical hydroseeders because it is both a jet and mechanical unit.   It allows quickly mixing thick slurries of hydro seeding material.  The operator can easily loading full bales with no breaking up of the bales required.   It has great spray power and the far superior trimming ability of a jet machine.   Clean up is not the big problem it is with other paddle agitated units.  The jets will flush the whole tank in seconds.    There is never a worry about rust.   Many users of other paddle units avoid using fertilizer in their mix because of the corrosive nature of the nitrogen in the fertilizer.   Turbo Turf’s hybrid does it all with never a worry about rust.    Units with metal tanks have square corners where the sides meet the end and material builds up in those corners.   Turbo Turf’s molded tank has rounded corners which eliminate material build up.

Turbo Turf’s HYBRID hydroseeder has a unique two engine design using two Honda electric start motors. This allows a far more simple and trouble free design than other units. The high pressure centrifugal pump is directly coupled to one engine and is capable of operating the unit independently as a jet machine. The second motor uses a simple double v-belt drive to turn the paddles. This drive is very simple and reliable and easy to service if there ever is a problem.

Many in the industry saw the concept of a paddle (mechanically agitated) hydro seeding system using a “PLASTIC” tank as having great potential. Early attempts by others involved hanging a bearing on the plastic tank and this approach did not work well. Turbo Turf took a whole new approach. The bearings and agitator shaft are supported completely by heavy structural steel supports and the tank is used for nothing but holding the material. There is no stress whatsoever on the tank and the entire mixing system would run without the tank even being present. This system has now been on the market for several years without a single failure. The system is so reliable that Turbo Turf has introduced a 20 year pro rated tank warranty on mechanical units such as the HYBRID.

The HY-500-HE will seed 6600 square feet per load. It is equipped with an 13 H. P. Honda electric start engine that is directly coupled to a 3″ X 3″ high volume, high pressure centrifugal pump (333GPM / 72 P.S.I.) and an 8 H.P. Honda electric start engine that drives an aggressive mixing paddle. The platform and tower gun are standard equipment. The hose reel shown above is an option and available with either electric or manual rewind. Standard equipment includes 100′ of 1 1/2″ I.D. hose with free flow couplings mounted on hose holders on the side of the tank. It also includes three nozzles ( 1 wide hydro seeding nozzle, 1 straight distance nozzle, and 1 trim nozzle). 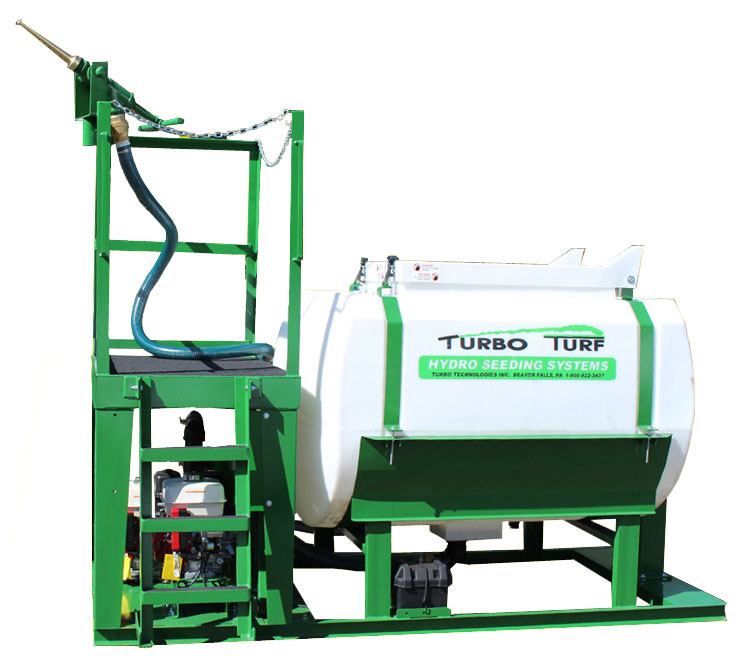 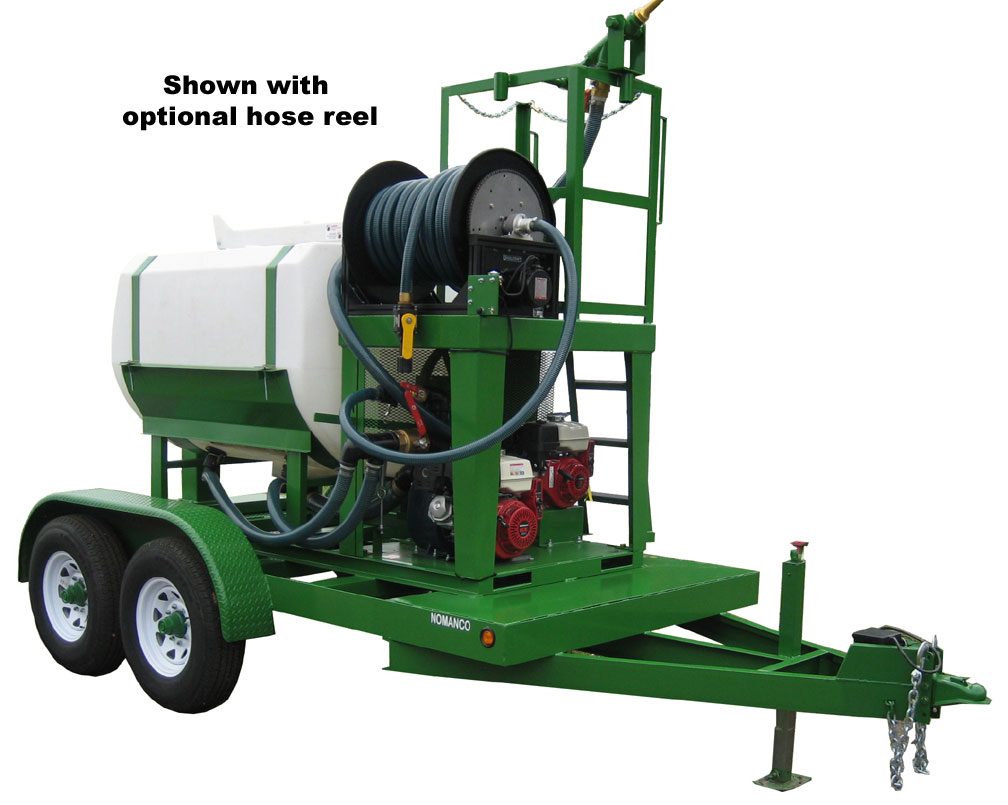