Turbo Turf’s specially formulated Witches Brew Tacking agent will outperform standard PAM tackifiers.  When you need to seed  extra steep slopes, when heavy rains are forecast or you want to make sure your jobs stay in place, Witches Brew is the answer.    Turbo Turf’s Witches brew is a high performance tackifer.   It combines three different tacking agent plus additives designed to minimize fish eyes, and lubricate the system.   It will hold better and requires less drying time than standard PAM tacking agents.   If you want a better product, this is it.

Turbo Turf Witches Brew  has positively charged ions that attract smaller negatively charged soil particles such as clay and sit that are often 3-5 microns in size into larger masses, as large as 200 microns.  Additionally it provides a slicker soil surface that helps prevent water from attaching to the soil particles as it flows.   Witches Brew stands out from the crowd.  Make your hydro seeding stand out from your competition with the extra assurance you are using the best product on the market. 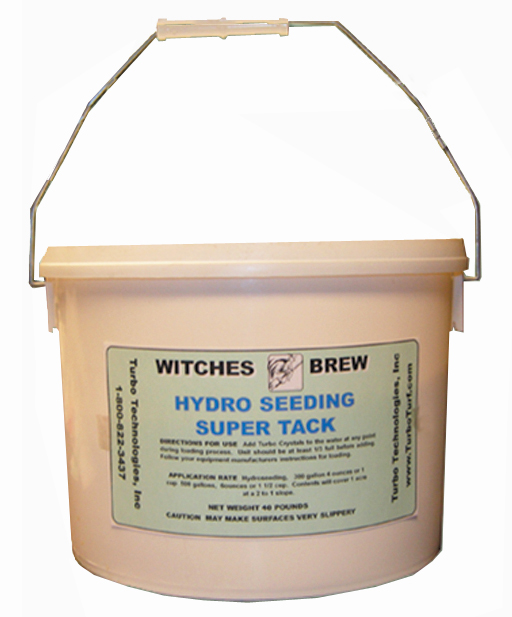 Typical shipping charges for one pail of Witches Brew tackifer are typically $ 18.00 to $ 24.00 depending on distance when shipped to a business.   Shipments to a residence can be higher

One 10 pound pail of Turbo Tack (will cover one acre)

$6995Plus shipping
Add to Cart
View Cart
Go to Top